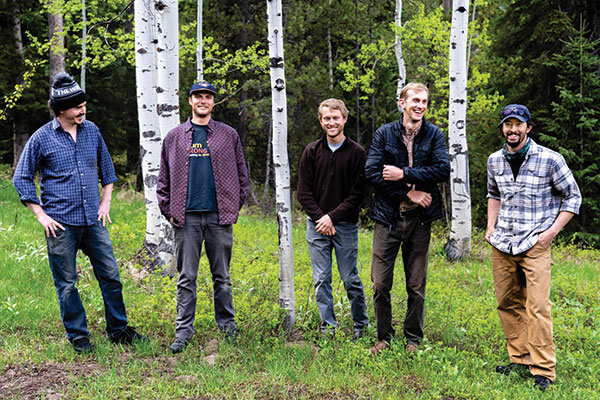 A Wonderful Web of Sound

Local band brings a little something for everyone

The uproariously tongue-in-cheek band Strumbucket weaves together a web of genres and a vast array of sounds into every performance — from blues and country to funk and rock, and all the way to samba and reggae. The lively quintet makes music for everybody.

“In one show we can have everyone’s foot tapping at some point and have people on their toes of what’s coming next,” says Peter Henderson, the band’s drummer, who beams proudly every time he gets behind his drum set. Having first sharpened his skills in jazz, the mellow drummer not only keeps the beat, but brings the good vibes with his cheesin’ smile and buoyant energy.

“Letting the sound find us, versus honing in on specific sounds is what sets us apart,” says Grove Miller who jams on the keyboard, pedal steel guitar, and fiddle. Grove, a founding member of the band alongside Peter and Alex Blackwelder, is also the founder and director of Global Arts & Innovation
Network, a local arts education nonprofit. “Out of all of us, he is the most full-time musician. He wears a lot of hats and plays with a lot of people in town,” says Peter. “He’s the maestro,” adds Alex, the band’s lead vocalist and lyricist who plays the electric banjo and harmonica.

Alex’s use of the electric banjo gives Strumbucket a unique sound, a sound that Peter says is “just something different. Many people are familiar with bluegrass banjos. Part of our twangfunk sound really comes from his use of the electric banjo.” Alex makes a point to keep things upbeat and silly, with a few heartfelt songs thrown in. This ability to hop between genres and styles with ease and the group’s lighthearted nature, keeps the audience on their toes — each song has a little something for everyone. “There’s a side of me that writes nonsensical things, a side of me that writes personal things, and then there’s been sort of an alter-ego side that has written some cheeky country tunes,” explains Alex.

Strumbucket’s funk virtuoso is Lavender Jones. Lavender was introduced to the band by Strumbucket’s former texture man and guitar player, Wick Bushong, who later went on to pursue a career in outdoor education. “When Lavender Jones joined, he cemented the funk side of the sound,” says Grove. Despite being a guitarist, Lavender took up playing the bass to round out the rhythm section and sings most of Strumbucket’s soul, R&B, and funk tunes. “I had to bring some pizazz. I love getting on stage in a nice outfit and really getting funky,” says Lavender, who’s dressed in snazzy cheetah-print shoes, a beret, and a vintage button-down shirt.

Strumbucket’s web of talent wouldn’t be complete without the bluesy rock riffs and licks of lead guitarist Curt Langer. Curt joined the band in 2019 after another influential member and multi-instrumentalist, Chris Kolodey, moved to New Orleans to further pursue his career and an education in music. Curt’s easy-going attitude and dedication to his craft made him a quick fit with the group, who found themselves gaining momentum leading into last summer. “He was passionate about learning the originals,” says Lavender. “He definitely inspired my work ethic,” adds Peter. Curt’s family, arguably Strumbucket’s biggest fans, attend gigs and practices and can even be heard humming or singing their band’s original music.

This summer, Strumbucket has plans to release new music and is exploring the idea of hitting the road. If you happen to catch a live performance around town, don’t be surprised if you hear a song that sings to your soul or you can’t help but get up and dance. Having fun is what Strumbucket is all about — “We want our listeners to have as much fun as we do.”

Next Story: Jackson Hole Still Works is all about keeping things local