Anytime there is a cold snap, Scotty Craighead grabs his camera and heads to the dike along the Snake River. While most photographers look up to capture Jackson’s famous mountains and scenery, Craighead points his lens down, focusing on the ice forming, cracking, and melting on the water.

In 2013, on a walk along the dike near Emily’s Pond, Craighead noticed snow crystals on the ice on the river. He took a few pictures with his phone, and eventually returned with his camera. Then he returned again. And again.

A change in light, temperature, or the river’s water level creates new subject matter, and that keeps bringing him back. Using a macro lens, Craighead photographs the ice from distances ranging from a few centimeters to a few feet away. Through his lens, looking at the ice in extreme close-up, he can see patterns the normal eye would miss.

“Ice can be beautiful from a standing distance, but it’s also beautiful extremely close—and beautiful in different ways,” he says. “There is something very personal about getting in close and viewing it. There is something about the fact that we’ve seen ice before from our human-level viewing, but when you can get up close in macro, it opens up a whole new world with images that are familiar, but also foreign.” 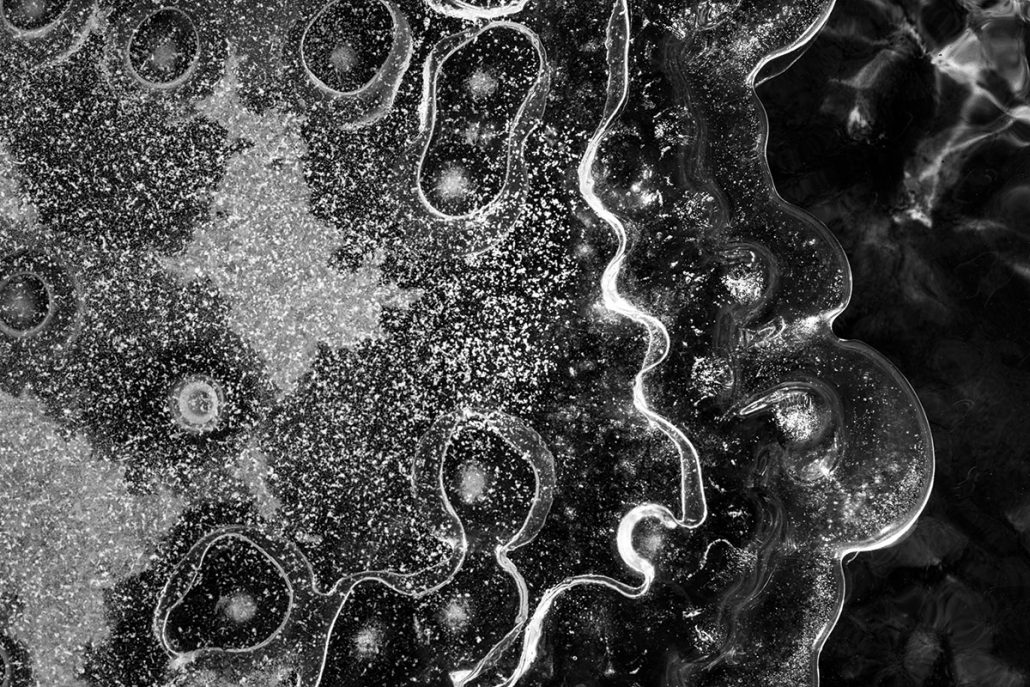 Craighead grew up in Kelly, Wyoming, in a family with generations of renowned scientists. Craighead thought he would become a biologist, too, but found himself drawn to art as a child, and then photography after his father gifted him his first camera in middle school. Photography blended the technical and scientific with the creative, and Craighead immediately loved it. He went on to study art at Colorado College, and he now works full-time shooting still images and videos, and making multi-media art.

His family also influenced and inspired his work. His grandfather was a photographer for National Geographic, and most of the scientists in his family also drew beautifully and documented their subjects. While Craighead became an artist, his work is about conservation and driven by his curiosity about the natural world.

“My subject matter is nature, and without conservation, it’s a dwindling subject,” he says.

In some ways he approaches his art like a scientist. Craighead studies the ice through his camera lens. The process allows him to spend time outside, often alone in the cold, running experiments on new ways to document the ice. This winter, he plans to attempt to photograph it from underneath the water. There are always new angles and compositions for him to discover, and he’s always looking for what he may have missed before.

“I don’t know what the limits are still,” he says. “It just keeps going. It really becomes an art of seeing the ice.”

Previous Story: For the Love of Mountain Adventure