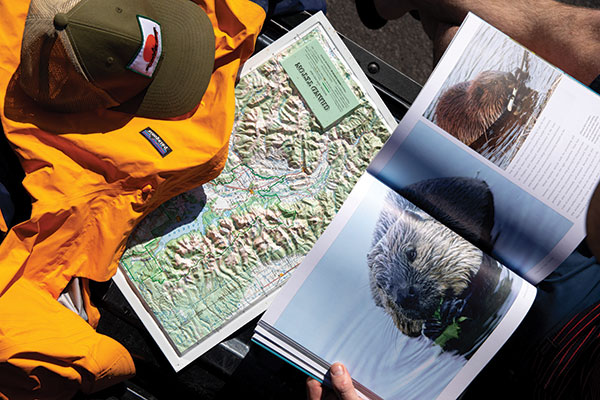 The ever-changing sounds and seasons of Snake River

Though he has been guiding for Barker-Ewing Float Trips for 13 years, Grant Bishop is still the “youngster” on the oars. When he started working on the Snake River at age 18, he was following in the footsteps of his father and uncle. His dad rowed for High Adventure Whitewater and his uncle owned High Country Flies. Grant describes growing up on the river — catching his first fish on a fly and learning how to roll a kayak in middle school.

Over the years he’s guided on practically every stretch of the Snake above the Palisades Dam. However, it is the unfettered stretch of the Snake
that runs through Grand Teton National Park that captured his heart. Grant spends his summers steering an 18-foot boat with no more than 12 people from Deadman’s Bar to the boat ramp at Moose Village. This 10-mile stretch is entirely within the national park — and the rugged outline of the Tetons is visible from almost every bend in the river. There are no levees along the banks; the water travels in bends and swirls, forming islands and channels
freely, spreading from bank to bank.

In the spring, when the water is cold and high from the melting snow, floaters can hear the deep plop of riverbank chunks falling into the stream. The sound of rocks lumbering along the river bottom, pushed downstream by the turgid current, echo up through the rubber raft tubes.

“The river channels change really quickly this time of year [spring], overnight sometimes,” Grant explains. “We scout the river before the high water starts and then watch closely every day we are out there. We’ll cancel trips if we aren’t confident of safe routes.”

"My favorite thing about this stretch of river is the constant change — we get new channels to explore every year, new hazards to avoid every spring."
Grant Bishop 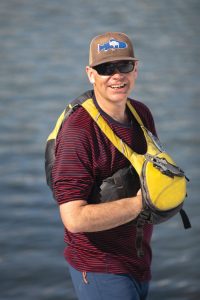 As summer settles in, the water slows and drops. Grant speaks fondly of rowing into backwaters or exploring the slower channels. “I’ve come around the corner in a small channel and had to pull over because we were roadblocked by a moose!” He describes the chirping sound of river otters, the classic call of the killdeer, and the startling “boom” sound of the dusk air passing through the feathers of a diving male nighthawk.

As the weather shifts to fall, the river becomes a corridor of golden-leaved cottonwoods. Bald eagle fledglings, dismissed from the nest, voice their discontent in shrill repeating notes. Grant laughs as he describes people’s response to the underwhelming cry of the nation’s avian mascot. “Most people think the eagle should sound more majestic. They picture the shriek of a red-tailed hawk, which we hear out here also!”

The end of Grant’s river season is often heralded by the first snow on the peaks and the sound of elk bugling. “My favorite thing about this stretch of river is the constant change — we get new channels to explore every year, new hazards to avoid every spring,” he reflects.

On the Snake River, as with the seasons, change is just around the corner. 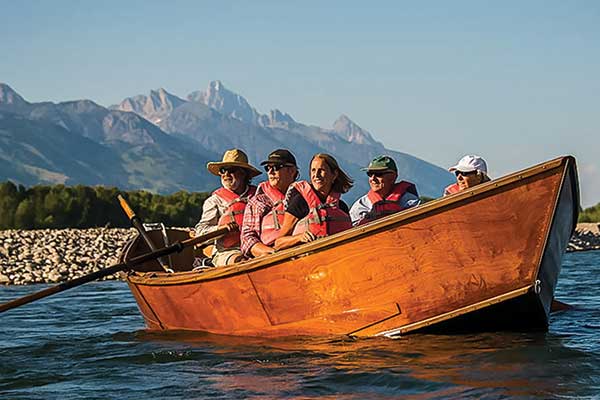 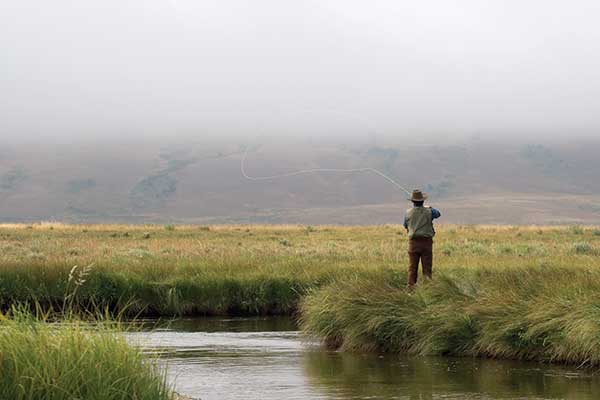