When former Olympian Karen Eaton started skiing with The Jackson Hole Ski Club in the mid-1950s, Jackson’s population was just 2,000 and only one paved road ran through town. A single chairlift climbed the right side of Snow King Mountain, which was the club’s training ground, until Eaton was a teenager and the mountain installed a double lift in the early 1960s.

This year, Snow King Mountain, which was Wyoming’s first ski area, and the ski club—which changed its name to Jackson Hole Ski & Snowboard Club in 2002—both celebrate their 80th anniversaries. A lot has changed since the early days.

Eaton recalls what a risky feat skiing was in the 1950s. “We had bear-trap bindings with metal grippers for our toes, and a clip in the back,” Eaton says. “There was no safety release. We either had to rip the bindings out of our skis, or a leg gave out, and we all had leather soft boots. Every kid I knew broke their leg at one time or another, including me.”

Eaton and her neighborhood friends would ski until dark, using the old rope tow on the back side of the hill, and ride back to town in the “jitney”—an old covered jeep with a wooden box on the back and seats inside, customized by Snow King founder Neil Rafferty. “We were snowed in most of the winter and very isolated,” Eaton says. “Our love of skiing bonded us together.”

To buy Snow King season passes, Eaton and her siblings collected and sold pine cones to the forest service for reseeding projects. “They paid us by the bushel,” she says. “A big load of pine cones was worth about $100.” A couple loads bought ski passes for her family of five.

Fortunately, the club helped raise money for Eaton’s travel expenses to the Olympic games in Grenoble, France, in 1968 when she was just 17 years old.

“I wouldn’t have been able to go without their support,” she says. “They made it possible for me to be on the U.S. team for the next four years, compete in the Olympics in Sapporo in 1972, and the World Championships.”

In Eaton’s time, the club consisted of cross-country, ski jumping, and downhill skiing. Programs now include Alpine, Nordic, freeride, backcountry, and academic support, and encompass both skiers and snowboarders. The organization remains a training ground for professional athletes, a community ski club for Jackson’s youth, and the thread that binds neighborhood kids and families together.

“The club is a conduit for a deep and rich history that has spanned 80 years,” says Jackson Hole Ski & Snowboard Club executive director Brian Krill. “It has lasted longer than most entities in the valley.”

To commemorate its long legacy, the club created a Hall of Fame housed in Snow King’s ski hut. Hall of Famers are selected based on their achievements as competitors, innovators, pioneers, and their work inspiring others. In February 2018, the Hall of Fame welcomed 10 new members, including Eaton.

The first class of 12 inductees joined the Hall of Fame in 2014 for Snow King’s 75th anniversary. This early class included Pepi Stiegler, who is an Olympic champion and the original director of Jackson Hole Mountain Resort’s ski school, as well as extreme skiing pioneer Bill Briggs, who was the first person to ski the Grand Teton. Olympic biathlete Pete Karns and iconic snowboarder Travis Rice were also part of the inaugural class.

“By honoring them, we highlighted the history and caliber of the club and community,” Jackson Hole Ski & Snowboard Club executive director Brian Krill says. “World-class athletes, educators, coaches and innovators have sustained the club.” Now, 22 members grace the walls of the Hall of Fame. Every four years, on an Olympic year, a new class will be instated.

As one of the original pioneers of the Jackson Hole Air Force—a legendary group of boundary-pushing skiers who worked to open the backcountry of Jackson Hole Mountain Resort—Rick Hunt grew up skiing on Snow King Mountain. 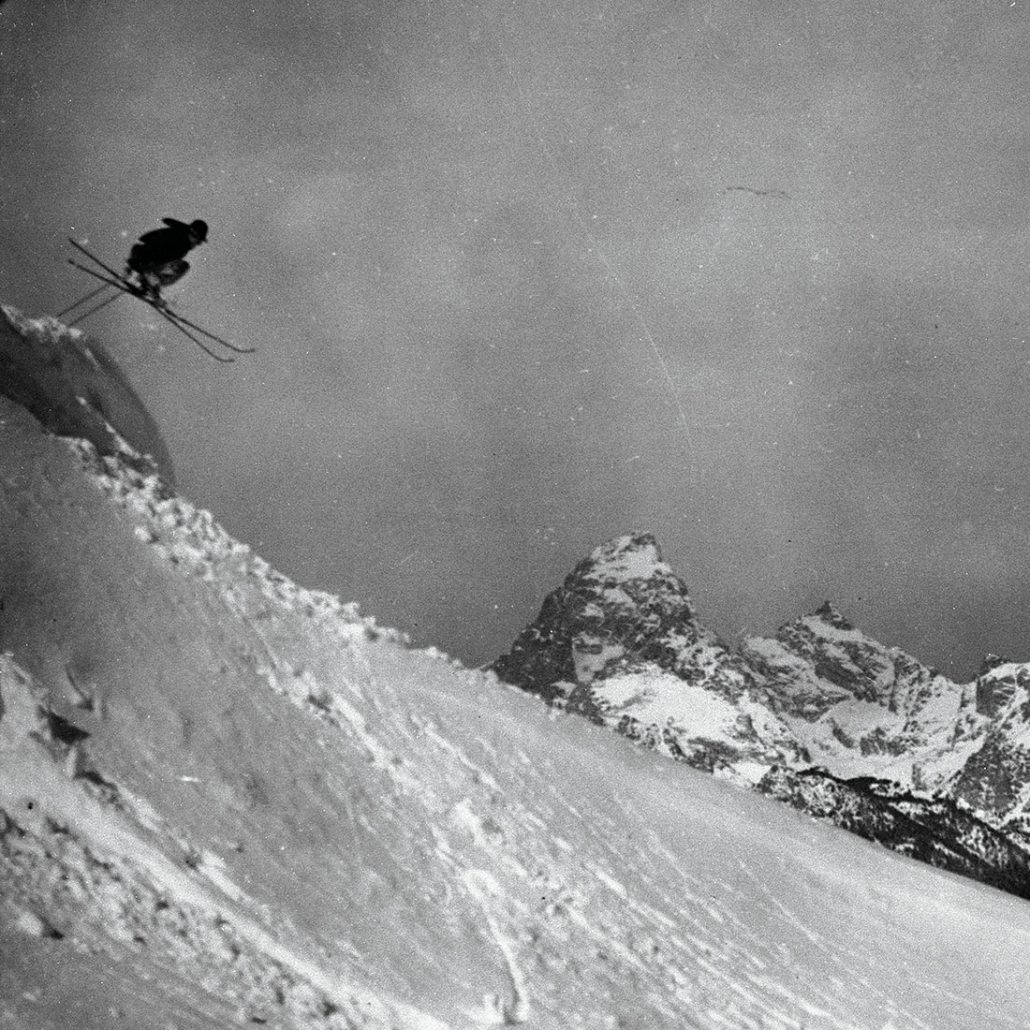 “In those days, all the youngsters aspired to be ski racers or cowboys in the rodeo,” he says. “The high school team got out of school at one in the afternoon for training. Back then, a lot of us still wore Levi’s skiing, and it was cold.”

As an adult, Hunt served on the club’s board for nine years, and was a vital force in the Building Our Base Campaign in 2013 which led to a state grant to purchase 22 snow guns and install lighting along the slopes and trails for night skiing. “It was a pivotal moment in Snow King’s sustainability path,” Hunt says. For the past 16 years, Hunt has also been the main sponsor of the Town Downhill race. He still skis in it, and placed third in the over-50 category last year.

Now one of the 10 living original Jackson Hole Air Force members, Hunt looks optimistically to the future of the historic club.

“We are entering a new phase,” he says. “It’s not as cowboy as it used to be, but still such a beneficial program to the community and the kids, shaping their character and teaching them accountability and life lessons. The key element is that we are a grassroots ski club, and we want to give every person in our community the opportunity to try skiing, ski racing, and winter sports.”