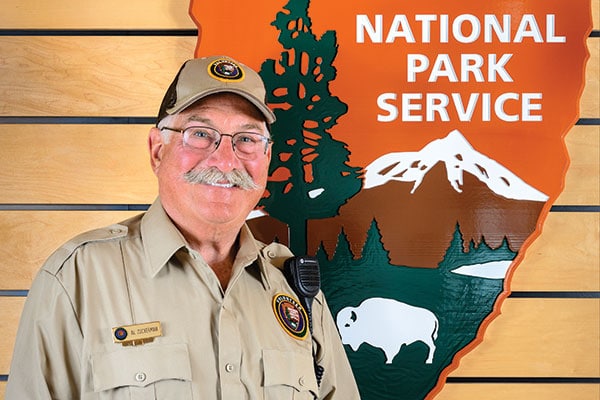 The grizzly sow and her cub popped out of the willows next to a line of cars. As people hurriedly retreated to their vehicles, Grand Teton National Park wildlife brigade volunteer Al Zuckerman noticed one man standing stock still, snapping photo after photo, disregarding the bears headed his way. “Sir! Please jump in that car!” Zuckerman shouted, motioning to his patrol car. The man finally looked up and climbed into the vehicle just as the sow and cub passed by. Zuckerman breathed a sigh of relief and later talked to the man about the importance of safety in bear country.

This is Zuckerman’s fourth summer volunteering with Grand Teton National Park’s Wildlife Brigade. He spends two days a week helping people and wildlife coexist safely. His work largely focuses on “wildlife jams” where traffic slows to a standstill as excited visitors park their cars on the road to get a better look at critters. The team works to keep traffic flowing and visitors and animals safe. If an animal is lying down, Zuckerman says his work can be fairly straightforward. But when an animal like a bear is active, things can get complicated—fast.

“We have to anticipate where the bear is going to go,” he says. “It could be simple to start or complex and fluid. If a bear is moving, the situation is changing and has lots of moving parts. We are constantly evaluating and re-evaluating the situation.”

When they’re not working on wildlife jams, volunteers patrol trailheads, campgrounds, and picnic areas, educating visitors and making sure food is stored securely.

Sometimes people are deeply moved by the beauty of the wildlife they see in the park. “I’ve seen people in tears when they’ve seen a grizzly and cubs,” Zuckerman says. “These beautiful wild animals they’ve never experienced before. It’s really rewarding to see them enjoy the park and wildlife and natural world.”

Zuckerman first came to the valley in 1972 as a summer volunteer in Grand Teton National Park. Then he worked as a seasonal ranger, county deputy sheriff, and parks superintendent of the Teton County/Jackson Parks and Recreation Department. In 2014, he retired and headed back to the park as a volunteer. In addition to his work with the Wildlife Brigade, he has volunteered to work on historic preservation projects and is a ski ambassador for the park. Outside of Grand Teton, he also volunteers at the Jackson Food Cupboard and works part-time for Legacy Lodge driving residents where they need to go. But he’ll always find time to spend in the park.

Next Story: A Snapshot in Time