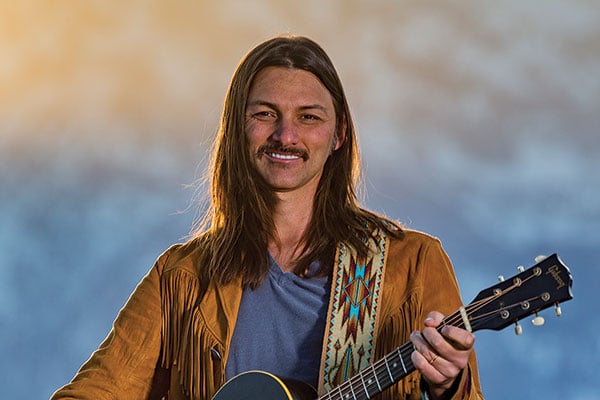 A second generation of musical greatness

Duane Betts’ first visit to Jackson Hole made a lasting impression on the musician. After a friend insisted that he join in on a trip, the two landed in the Tetons and made a stop for groceries after leaving the airport. There, a serendipitous encounter would change his life.

“That’s when I met my wife Lisa at the Aspens Market in Wilson,” Duane says. He was smitten with his future wife, and her hometown too. “Jackson is a powerful place, a very, very special place,” he says. The two were married at the Chapel of the Transfiguration in Grand Teton National Park last year, and now divide their time between Jackson Hole and Malibu.

Jackson residents may recall seeing Duane join Gov’t Mule on stage at a JacksonHoleLive performance last summer, a memory he recalls fondly. The impromptu opportunity to play music with friends here in Jackson was fortuitously timed, as music frequently keeps Duane traveling with his band the Allman Betts Band.

“I’ve always been a musician, as far back as I can remember,” Duane says. His father, Dickey Betts, was one of the founding members of the Allman Brothers Band, and Duane spent many of his formative years on tour with his father. “I love touring,” he says. “It’s something I’ve always loved — seeing new places and meeting new people.”

It was while on the road with his father, over 30 years ago, that Duane met Devon Allman, son of Gregg Allman, another founding member of the Allman Brothers Band. Fast forward to 2018, and the two friends formed the Allman Betts Band.

For Duane, the band feels like family. The bass player, Berry Oakley, is another longtime friend and the son of the original bass player for the Allman Brothers Band. “The three of us go way back,” says Duane.

Since forming their group, Duane and Devon have been busy writing, recording, and touring. Duane calls out one recently recorded song, “Ashes of my Lovers,” as a favorite. “I’m really proud of that song,” he says. “It really stands out to me.” The song was written with Stoll Vaughan, a songwriter who frequently collaborates with the duo.

Duane views self-expression as an important aspect of making music. “I love expressing myself through the guitar,” he says. “If you have a feeling and you want to get it out, you can do it through music — it’s medicine. I love the idea of making people feel better. If people can come to our show and walk out feeling uplifted, then we’ve done our job. Spreading good energy and hope is what it’s all about.” In both music and life, Duane values staying true to himself and always putting forth authenticity and honesty.

Although Duane is invigorated by life on the road and playing for people around the world, he often craves the calming, grounding aspect of life in Jackson Hole. At home, he’s often outdoors; harnessing the inspiration he gets from nature and keeping his acoustic guitar nearby. “Hearing the sound of streams and nature, that’s a big inspiration,” he says, noting that he’s looking forward to soaking up every bit of summer in Jackson with Lisa and their new puppy.