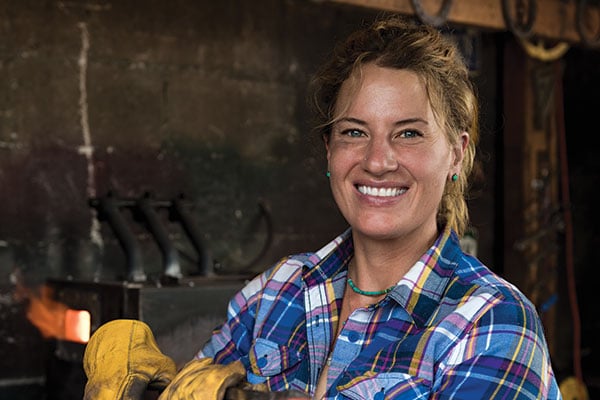 Spark of the Wild

Sparks fly as Alexandra Paliwoda works to transform steel into the intricate petals of a flower in her Driggs, Idaho, blacksmith shop. Her creations are functional and artistic, and range from wine racks made of artfully arranged horseshoes, to a hand-forged firefly coat hook, to the custom-designed handrail at the Royal Wolf.

Paliwoda started her shop, Backcountry Blacksmith, in 2000, and moved the operation to Driggs over seven years ago after taking a winding and somewhat eclectic path to the Tetons.

As a kid, she lived in Haines, Alaska, before moving deep into the state’s interior. As an adult, she spent a winter living alone in a solar-powered cabin in the Alaskan wilderness on the north end of Wrangell St. Elias National Park. She spent a lot of time running and backcountry skiing there and, occasionally, she shared hot chocolate or dessert with a neighbor. But she found most of the people who wintered up there were seeking solitude.

“You had to be okay on your own for six to eight months,” she says. “I loved the quietness, I loved the fact there were huge mountains there. Mount Sanford, Mount Drum, you just know there was nothing on the other side of the mountains.”

She stumbled upon Driggs when she was driving between Bozeman, Montana—where her family lived after moving to the Lower 48—and her blacksmith apprenticeship in Colorado. Years later, she decided to make Teton Valley her new home.

Paliwoda’s team at Backcountry Blacksmith includes five others, and they work to produce thousands of pieces at a time, from cheese knives to decorative horseshoes, to fulfill orders. They offer a catalogue of 65 items in addition to custom pieces. Working with the metal itself is part of the magic.

“I love how you can take something so insanely seemingly indestructible—steel—and when it’s heated it becomes so malleable,” Paliwoda says. “You can turn it into a flower. I love how it moves under heat and is very forgiving.” 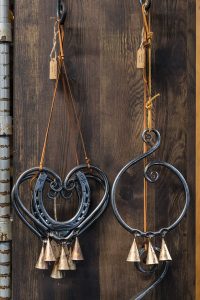 While the team is busy fulfilling orders during the second half of the year, Paliwoda can often get away for a few months early in the year. Her adventurous spirit leads her to trek, compete in endurance runs, and practice photography all around the world. She’s traveled to Nepal, Southeast Asia, French Polynesia, Australia, New Zealand, Indonesia, Canada, Europe, and many other places. In her early 20s, she sailed from Florida through the Amazon rainforest to Manaus, Brazil. She’s also made her way from Fairbanks, Alaska, to Tierra del Fuego, Argentina. Next on her list? Possibly Sri Lanka. 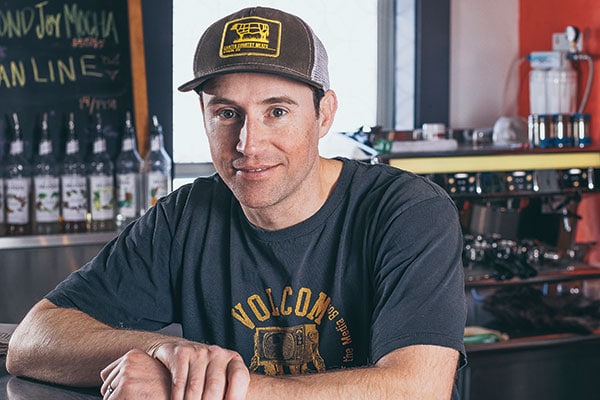